How to photograph the milky way

A guide for beginners on how to photograph the milky way

Witnessing the milky way on a dark night, maybe even sleeping the night outdoors while watching it, is something really special. And remembering those moments by taking a picture of it, is a really fun thing to do.

How good your milky way pictures are going to be, depends on many factors. I put together a quick guide that is going to help you out, even if you just bought your first camera. Let me show you my approach to planning, shooting and editing this image from Belvedere Hotel in Switzerland.

Before you can actually go out and shoot, you need to know when and where the milky way is going to be visible. You can see the milky way all year around on a clear, dark night sky. However, if you want to photograph the galactic core which is the part that looks the most impressive, February to October is the best time. That’s because the milky way travels higher in the sky.

In general, the milky way rises as following throughout the year:

So, usually for rough scouting, I use a map and just look for spots facing south. Later on, for more precise planning, I’ll check out the location during the day and use the PhotoPills app with its augmented reality function.

Another important planning factor is artificial and natural light. It brightens the night sky and weakens the view on the milky way.
Avoid bigger cities close to your chosen location.

Also, watch the moon phase. The perfect time is around a new moon. But you’ll get good results too if you plan the shoot on a night with a moon setting before dark, or a moon rising in the morning.

Again, I use the PhotoPills app to calculate and plan the moon phase. Lastly, plan shooting after astronomical twilight, when it’s as dark as it gets. You’ll find this information in PhotoPills as well.

With that in mind, you additionally want to focus on a location that doesn’t block the view on the horizon too much. Try finding an elevated place, or if you shoot from a valley, keep a distance to high mountain ranges. If you found a suitable location, optimize your success by scouting the location beforehand during daylight. This way you can try out different compositions without being under time pressure. Use the PhotoPills app, which allows you to view the night sky in augmented reality. You can try to find a subject for the foreground that makes the image even more interesting like I did with this old hotel. Though, photographing the milky way on a bare sky is already incredibly beautiful.

What should be in your bag?

Let’s talk about the tech stuff!

We’ll be shooting in really low light, so a camera with a big sensor and excellent high ISO performance will give you an advantage. Now, this doesn’t mean you need to buy the most expensive camera right away.
I use micro four-thirds crop-sensor cameras and got some decent night images so far.

For the lenses, you want to use a wide-angle lens with a large aperture like f/2.8 or f/2.

I use the Leica 12mm f/1.4 (24mm full-frame equivalent) for most of my night images.
But, when I began shooting the milky way a few years back, I even shot a portfolio piece on the cheap Samyang 7.5mm at f/3.5. So if you just started out, try using the gear you already have and evaluate what you need later on.

You can always contact me for personal help on gear.

Obviously, bring warm clothes, enough batteries and a headlamp. Also pack some awesome, delicious, freshly ground coffee (coffee can be replaced by beer, although I suggest coffee, coffee is really the only thing you should not forget).

Take a good tripod with you, you’ll be shooting multiple second exposures.  Don’t buy those cheap tripods. I broke too many of those already when I started photography.
You can also bring a remote shutter release. I use a really cheap one without a timer or any other features.

Alright! After all this planning, let’s get to the fun part. And it’s actually the easiest part too.
If you did not scout the location in advance, get there early enough to find a good composition, check in with PhotoPills again and make sure the milky way rises at the right position. I usually frame the shot at blue hour and don’t change my camera angle anymore.
For this image, I prepared to see the core right next to the hotel. The building was put dead center because of the symmetric road. I had a wider composition planned, but the many cars arriving and parking in my shot forced me to go closer.
So always be ready to adapt and never complain about these little challenges if you chose a famous spot like this. Instead, make friends with the other photographers. Talk about their approach to the scene and try taking your best picture ;).

If you try out settings, keep in mind that doubling your ISO lets you reduce the shutter speed by half and vice versa, for the same exposure of the image.

To frame a shot again in the dark, you can use extreme high ISO and fast shutter speeds. The images are going to be unusable, but you don’t waste too much time finding the perfect angle. This method will also help you with finding the perfect focus quickly.

Use a remote shutter release or a two-second timer on your camera to snap the picture. This will prevent shaking the camera and blurring the image.

Getting the stars crisp

If you found an appealing composition, try different ISO and shutter speed settings. The wider the lens, the longer your shutter speed can be without blurring the stars too much as caused by the rotation of the earth. The display of my Lumix is very high-res, so I always zoom in and review closely, then adapt. There are rules out there letting you calculate the optimal shutter speed for every focal length. But, like always in photography, listen to your heart. If you feel like those stars are blurred too much, reduce the shutter speed and try higher ISO. Definitely try different settings so you can choose the best image in post.

As for me that day, I knew I can push my G9 to ISO 3200 max if I wanted acceptable noise. This led to a shutter speed of 15″.
The easy thing about shooting the night-sky is that you can almost always use similar settings.

Don’t forget to be in awe of the milky way for a couple of moments. This is really what it’s all about.

Since this is meant to be a “how to” on the basics, I kept the editing rather simple. I still suggest getting RAW processing software if you want to get into photography more.

I’m really pleased with Adobe Lightroom and have been using it for 4 years now, 3 years ago I even switched to the Adobe CC photography plan and started using Photoshop too. But you might have found or will find another solution to fit your needs.

However, this is a quick overlook of how I edited this image in Lightroom only.

After opening the Software and importing the images I filtered them in the library module. Personally, I look at all the images from the shoot and rate all images that are somehow usable with one star. Later on, I delete all unrated images forever. Then I view all the rated images again and rate the best of each set or composition as two star images and so on.
From this particular shoot, I decided to use the following RAW as a starting point:

Then I switched to the develop module. For the adjustments, I prefer working from top to bottom by adjusting the white balance first, a good starting point for RAW images shot at night is around 3800K.

Next, tonality. I usually bring up the shadows and play around with the sliders while I try to find a good balance between shadows and highlights. Always keep an eye on the noise and don’t push it too far, especially with low light and high-ISO images.

After this, I applied some noise reduction and brought some sharpness back in. Sharpness settings really depend on the style of your picture. Play around with the sliders again and watch closely what it does to the image, find a balance between acceptable noise and softness. You can try my settings as a starting point. 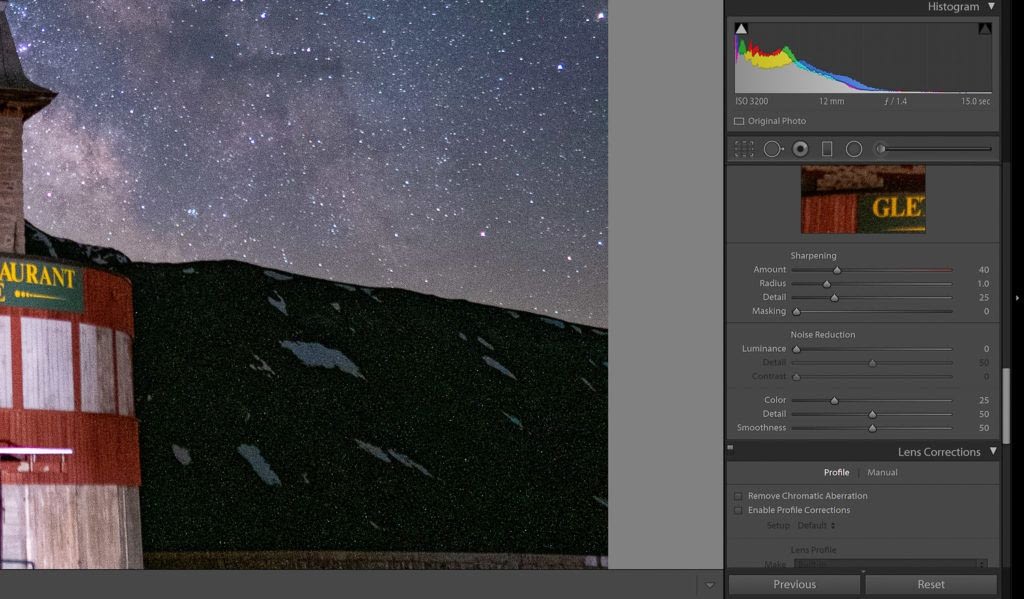 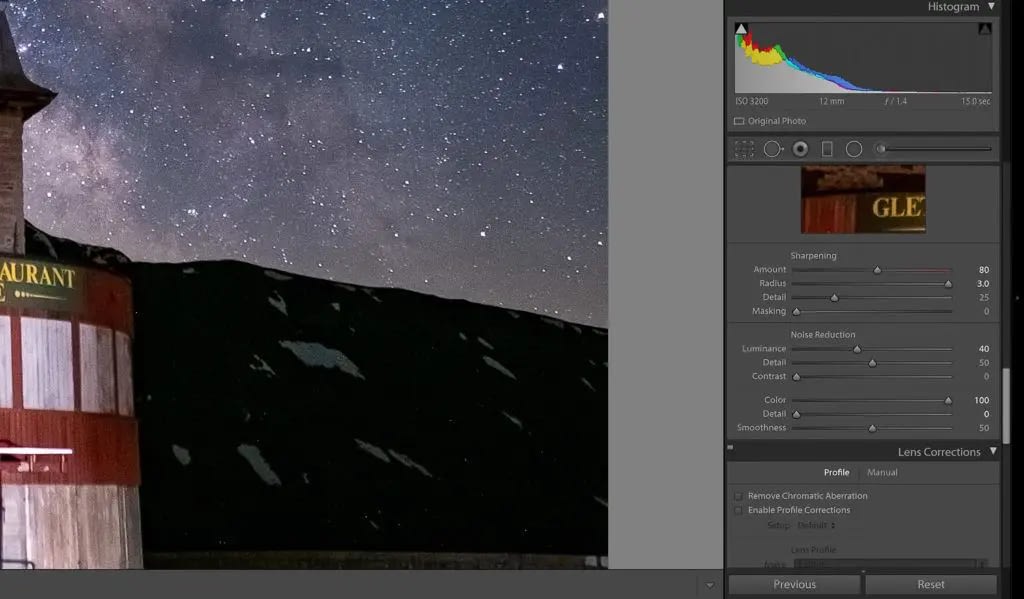 Some radial filters help to adjust the most important parts. So I applied one filter only to the old hotel and brought up the exposure, so it really pops out (Find the radial filter on top of the panel).

I applied a similar procedure with the milky way. A little more brightness and contrast, supported with clarity and dehaze enhancement make the milky way look awesome.

I hope you got inspired and go out enjoying the night sky. To me, spending a night under the stars is one of the most special experiences and hopefully you get to feel it for yourself soon.

It was really fun writing my first ever blog post. Let me know in the comments if you have further questions, suggestions for the next post or criticism.

Also, I’d love to see what you end up with, so DM your milky way shots to my Instagram!

Additionally, if you want to step up your photography game now, consider Adobe Creative Cloud as your photo-editing software.

Finally, here’s the shot before and after: 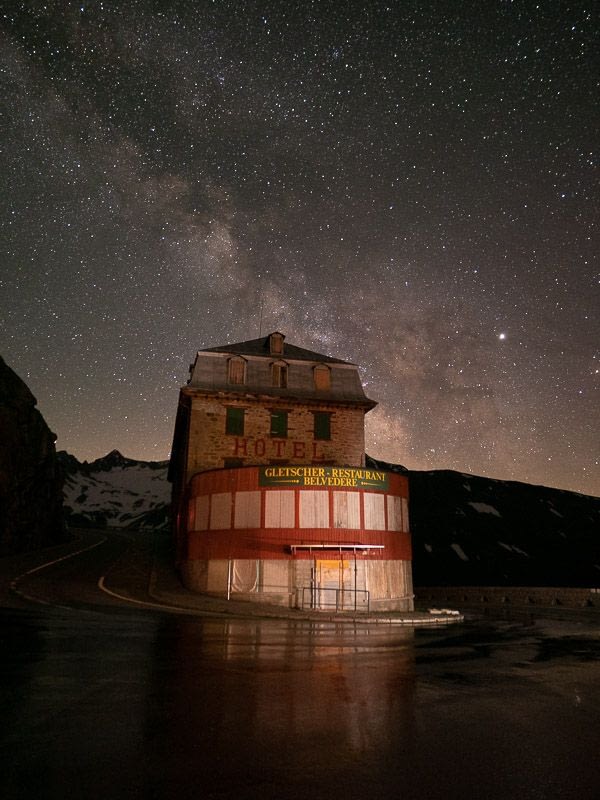 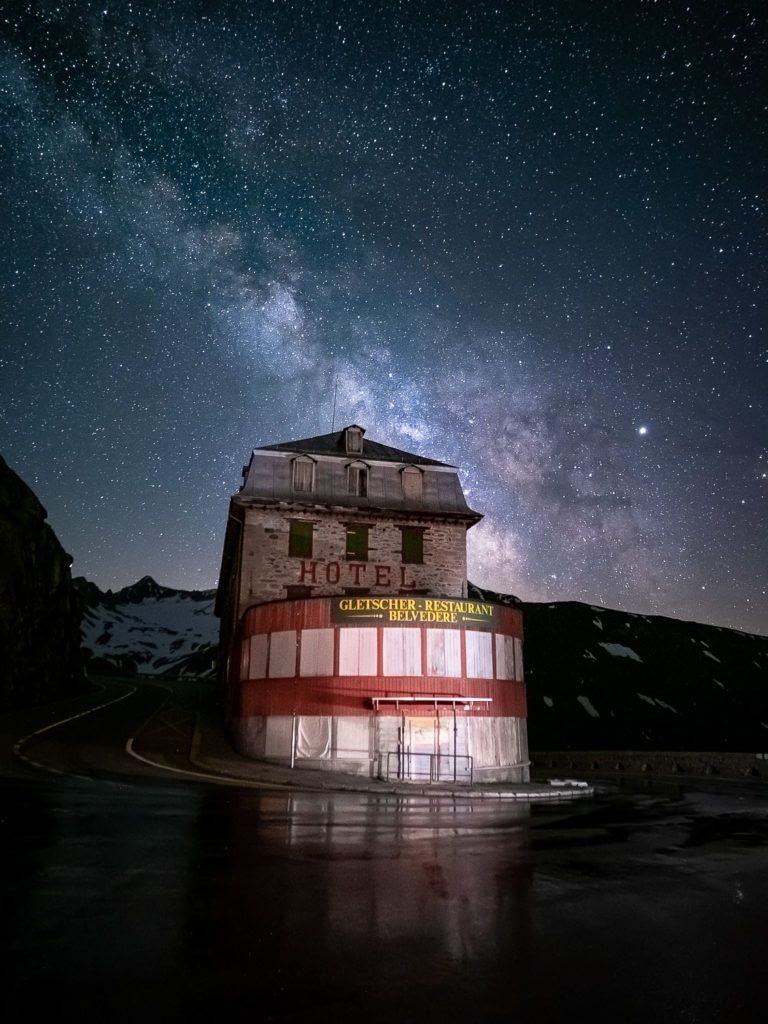 Thank you for your support! Some of the links that recommend products on this page are affiliate links. If you use these links for a purchase, it supports me with no additional cost for you and enables me to continue posting free content. I only recommend products that I used for an extended period of time and that I would buy again.